LARGERADIO.COM started out in November of 2005 as an idea between 2 old school friends, but was officially launched on January 5th, 2006 with the goal of helping to keep the real caribbean culture alive. SMLarge Entertainment (Miami)and Not-A-Cent Production (The Netherlands)linked up in 2005 and history was made.

A versatile online radio station that plays caribbean music with a strong emphasis on soca music from all islands 12 months a year was formed. Powered by SMALLISLANDMASSIVE.COM that has been in existence since August of 2001, the musical database of Stanman and Lennox combined, plus the added talents of focus-driven DJs from around the globe, was and still is the main meaning behind the name.

This station will definitely be remembered by many for the fact of the various caribbean cultures and unbiased musical playlist that can be heard 24 hours a day.

CLICK HERE TO OPEN DIRECT LINK IN YOUR WINDOWS MEDIA PLAYER
FOR SLOW COMPUTER, USE THIS LINK 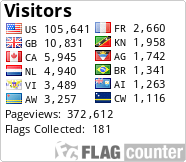 Home Of The Real Caribbean Entertainment

When Perfect Is Not Good Enough, Get Effective

The Best In Caribbean Music From All Islands #morethan4